I recently purchased a MagicJack

to try it out, and to provide me with a phne number that I could use when traveling. I had low expectations when I purchased it, but was pleasantly surpised at the sound quality the performance. The summary of my review is that for many situations, the Magic Jack provides an ideal and much less expensive alternative to traditional phone service from your phone or cable company. There are several differences, and cautions, however, that I discuss below. 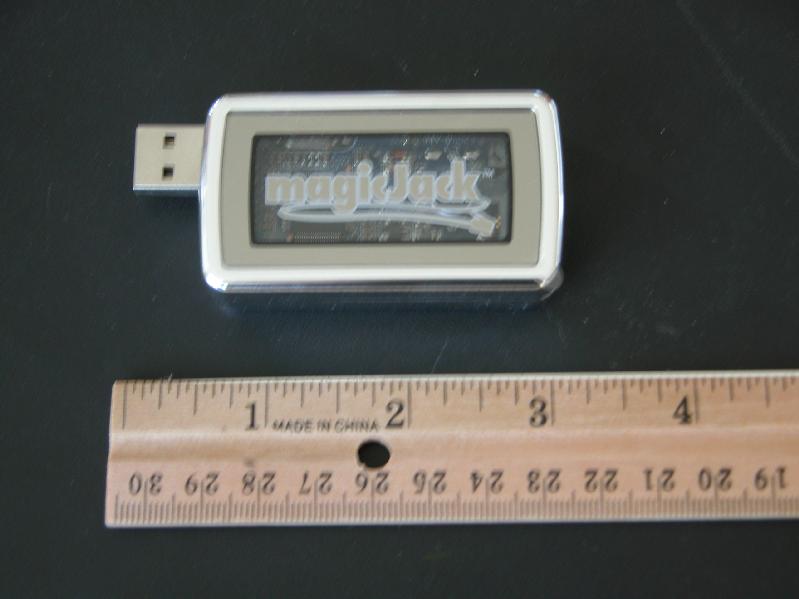 Magic Jack is a software based voice over IP telephone service. At first you may be scratchig your head at this label, because the Magic Jack is a device that plugs into your computer through its USB port, and doesn't that make it hardware? Well, the hardware part of the Magic Jack is primarily a combination of a USB disk that contains the software (actually, it contains the software installer, with much of the actual software automatically downloaded), plus a little bit of circuitry to drive a microphone and speakers (which are in your telephone, that you connect to the Magic Jack through a modular phone connector). The procesing of the network packets, and the generation of encoding of telephone audio is done on your PC using the accompanying software in much the same was as is done with Skype. When I tried it using Windows XP, installation was trivial, just plugged in the USB device, waited a few minutes, and everything was set up automatically, I chose a phone number, and it just worked. Once installed, you plug your telphone into the Magic Jack, and use it the same way as you would a landline phone, and I found sound quality to be the same as I used to get from my landline phone.

Some Observations and Cautions

In this section I discuss some of the limitatios of the MagicJack. This is not a criticicism since the MagicJack was designed with these limitations in mind.

The MagicJack uses your personal computer and will not function when your PC is turned off or in standby mode. This means you will need to leave your computer on even when you are not using it (other than to provide phone service), and since many computers use lots of power, this is not engery efficient. This also means that you rneed a computer with sufficient processing and memory resources to run Magic Jack, and while you are talking on the phone, you will be using the processor on your PC, slowing down other programs you might be running. If you already use your PC for computationintensive application, such as many games or graphics packages, this may affect the quality and reliability of your phone service. Finally, if your PC configuration is unreliable (e.g. if you find that you frequently have to shut your system down and restart it because it stops functioning properly), then you will not have phone service from the MagicJack while you are rebooting your system, and the addition of Magic Jack during system restart will slow the boot process.

Like any INternet based voice over IP service, the relaibility of your service and call quality is dependent in part on the quality of the internet service provided by your internet service provider. I have found my provider, Time Warner Cable to be unreliable, meaning that on several occasions I have been onable to connect to the phone server, and thus was unable to make or receive phone calls. Fortunately, this does not happen that often, and incomming calls during this period are directed to voicemail.

What MagicJack is great for

MagicJack is ideal for several purposes, and I describe them here:

A phone for students away at school - Magic Jack is ideally suited to provide phone service to students away at school. The startup cost, i.e. the cost to purchase the Magic Jack, is likely less than the connection fee to establish a landline phone. Since students move frequently, often every year, they can just take the MagicJack with them from location to location - so long as they have network service. Since most student dorms today to provide networking, and since students living elsewhere often get networking service anway, it means that transfering the phone service and paying a new installation fee is just not necessary.

A phone for travel - You can use the MagicJack from your hotel room, using the network service in the hotel, to make and receive calls on your personal phone number. The Magic Jack is tiny, slightly larger than a USB memory stick, meaning it is easily added to your collection of laptop accessories in your laptop case. Be aware that no all hotel internet connections are reliable, and I have been at many where the connection speed slows to a crawl because the connection is shared by so many guests. In this case you may find the Magi Jack doesn\'t work, but for most hotels this will not be an issue. While some of the higher end hotels charge for internet access, if you are likely to use the internet for other things, the MagicJack allows you to get phone access without paying extra.

A second phone number, or a second phone line, or a phone for making long distance calls - MagicJack provides what is effectively unlimited long distance within the US, outbound from your Magic Jack phone for $20 per year, with the first year included in the price of the MagicJack itself. Additionally, you get a phone number attached to the Magic Jack, which you can use as a second phone number if you already have a primary landline phone. You can accept calls on the Magic Jack phone number through your MagicJack or you can set it over the web to forward to anyother phone, giving you what is essentially a follow-me number. Finally, it is a second phone line, and if you share a primary line with others, then this provides you with a way to make and receive calls when your primary line is in use.

While there is nothing that prevents you from using the MagicJack as your primary phone, and I gave one exampel above where it makes sense to do so, I would not reccomend using it as your primary phone if you share that phone with other members of your family. The reasons are two fold, first, while you see the value and savings obtained from using the Magic Jack, they might feel like you are being "cheap" on those occasions that the network is down, and they might not be willing to make sure the PC is on whenever they want to make a phone call. If your PC is a laptop that you take with you ontravel, or to work, that also leaves them with no phone service during those times. And finally, it means that their use of the phone may interfere with your use of the computer, and if you need to reboot you will need to warn them that their phone call is about to drop.